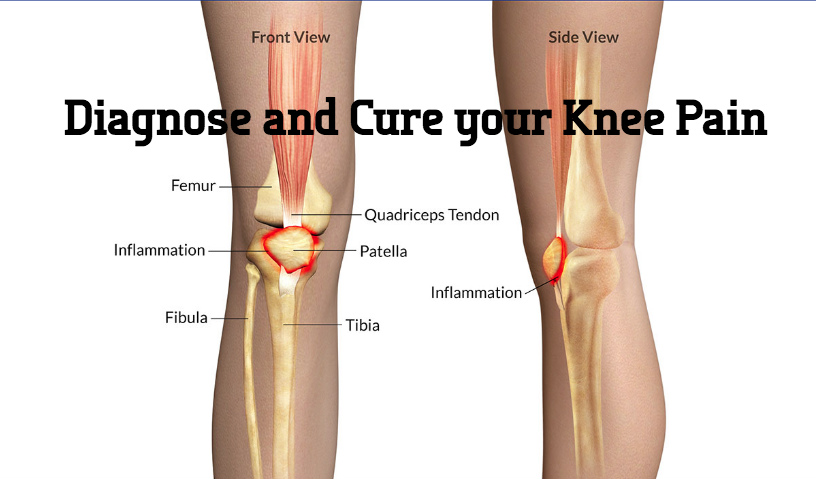 Diagnose and Cure your Knee Pain

Knee pain is one of the most common issues / injuries faced by runners. The pain can occur in a few different places in and around your knee, but it usually has the same underlying cause. 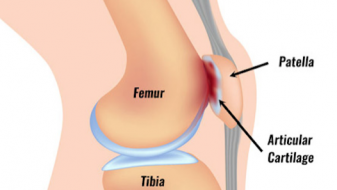 This is the term for pain felt behind your kneecap where your patella (kneecap) articulates with your thigh bone (femur). This joint is called the patellafemoral joint. The pain is usually felt as a sharp stabbing type of pain and usually comes on when walking or running down stairs or down slopes.

Your patella normally glides up and down through a groove in the femur. As your knee is bent the pressure between the patella and the groove increases.

Over a long period of time Patellafemoral dysfunction can cause degeneration of the cartilage on the back of your patella. 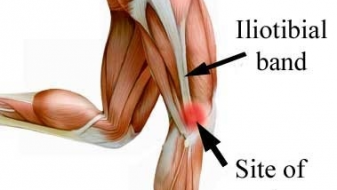 The ITB is a band of fascia which starts near your hip joint and runs down the outside of your thigh, attaching in and around the outside of the knee. ITB Friction syndrome is felt on the outside of your knee. It often starts as a dull ache which comes on when you run but disappears again after the run. If you ignore it, it starts coming on earlier and earlier during the run, and before too long it can become a sharp stabbing pain which makes it difficult to bend your knee and almost impossible to continue running.

Read THIS ARTICLE to learn more about ITB Friction Syndrome. 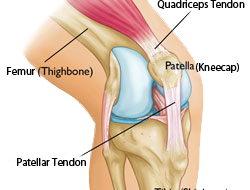 Patella tendonitis is an overuse injury where the patella tendon becomes inflammed, and then eventually starts to degenerate (patella tendonosis) if it isn't addressed. Like other overuse injuries in runners it is caused over a period of time by doing more damage to the tendon than your body has been capable of repairing. 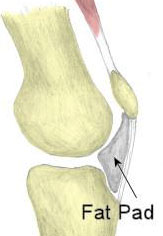 This is actually a very common, but often mis-diagnosed, knee problem in runners.

The fat pad is a soft tissue structure that lies below the patella and under the patella tendon. It acts as a shock absorber to to protect the underlying structures from direct impact, but it often becomes inflamed and painful in runners.

How do you diagnose which one of these "injuries" you have?

Most runners only have one of these issues when they come into a physio clinic for treatment, but it is possible to have two or more of them at any one time. You could have patella tendonitis and fat pad inflammation for example. The longer you have had pain in any of these places, the more likely you are to develop further issues. The moral of the story being - don't ignore the pain!

None of these injuries respond well to rest alone, you need to take a proactive approach with stretches and exercises to relieve the symptoms and prevent recurrence.

You can self-diagnose which of these conditions you have primarily by the site of the pain, and also by recognising how and when your symptoms came on.

All four of these conditions typically have the same underlying cause:

It is common for runners to develop very strong and tight VL muscles, which pull the patella slightly outwards, so that it doesn't track smoothly through the femoral groove. It causes rubbing/friction under the patella which causes pain (patella femoral dysfunction).

If this imbalance has been occurring for a few days or weeks it causes soft tissue inflammation (patella tendonitis, ITB syndrome, fat pad inflammation)

What causes the muscle imbalance?

The muscle imbalance in the quads can be caused by a few different factors.

What is the best self-treatment?

Because all four of these knee conditions have the same overriding cause (a quadriceps muscle imbalance), they all respond well to the same type of treatment.

If you already have knee pain you should use these stretches and exercises to reduce your knee pain symptoms:

(NB: If the Hunter-Gatherer Squat causes pain deep within your knee joint then you may need to avoid that particular exercise and see your local physiotherapist for an assessment)

If you want to test your pelvis stability and whether or not you have a lazy Glute Max then you should watch these two videos:

Once you have learnt to switch on, or "activate" your glute max - then you should start introducing  some regular strength and stability workouts to your training routine. We have  four different 10-Minute workouts designed for exactly this purpose: