13 minute Personal Best -   The best feeling in the world!

13 minute Personal Best -   The best feeling in the world!

Growing up I was never much of a runner and in my youth till my mid-twenties my main sporting pursuit was sailing, after which I really "let myself go", putting on weight and becoming very unfit. I can still remember knowing I had to do something about it and pulling on the shoes to go out for my first run... and barely making it to the end of the street before I was out of puff and walking! I persisted and eventually became a "runner" doing events like City2Surf and much later  half-marathons... and then marathons.

Upon entering my first marathon, the first thing I did was look up the Six Foot Track entry criteria to find out how fast I had to go to get a qualifier, having walked the Six Foot Track as a teenager and being told there are some crazy people that run this as a race!

Fast forward to 2018, my 6th Six Foot Track to get my buckle, my plan was to run it well and get a PB so I knew my training had to be spot on. In the past I'd tried everything from adapting marathon training plans to just winging it and while I'd done ok, I always found myself standing on the start line unsure of my preparation and not feeling confident. Not this time!

When I saw The Body Mechanic Six Foot Track training plan I immediately signed up and even just after the first few weeks of following it I knew this was going to be the year!

My race started well at the front of wave 3 running down Nellies Glen to the Cox's River for the start of the climb to the Pluvi. The hill training stood me in good stead and I got to top feeling good and still able to run. In the past I always felt spent at this point and it became a matter o 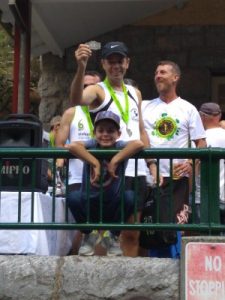 f survival. Not this year.

Seeing the crossing at Caves Road is always a good knowing it isn't far to go. Then the best sound in the world is the cowbells at the finish as you head down the steep descent down to Caves House.

Reaching the path winding down to the finish line the emotions rushed up seeing my family and friends there to cheer me on as I crossed the line scoring a 13 minute PB and getting my Six Foot Track buckle! Awesome! The best feeling in the world!

A huge thanks to Mark Green for developing such a great training program. It was so reassuring to know exactly what I had to do each week in each session. I really appreciated the recovery weeks and the taper period was perfect. I've never felt so well prepared and confident. I'll definitely be following this program again... and again! Just six more to get my belt... and six more to get my jacket!

Turn up to the start line ready achieve your personal best.

The plan includes daily workouts, strength routines, nutrition and gear advice. Everything you need to build your race ready body.