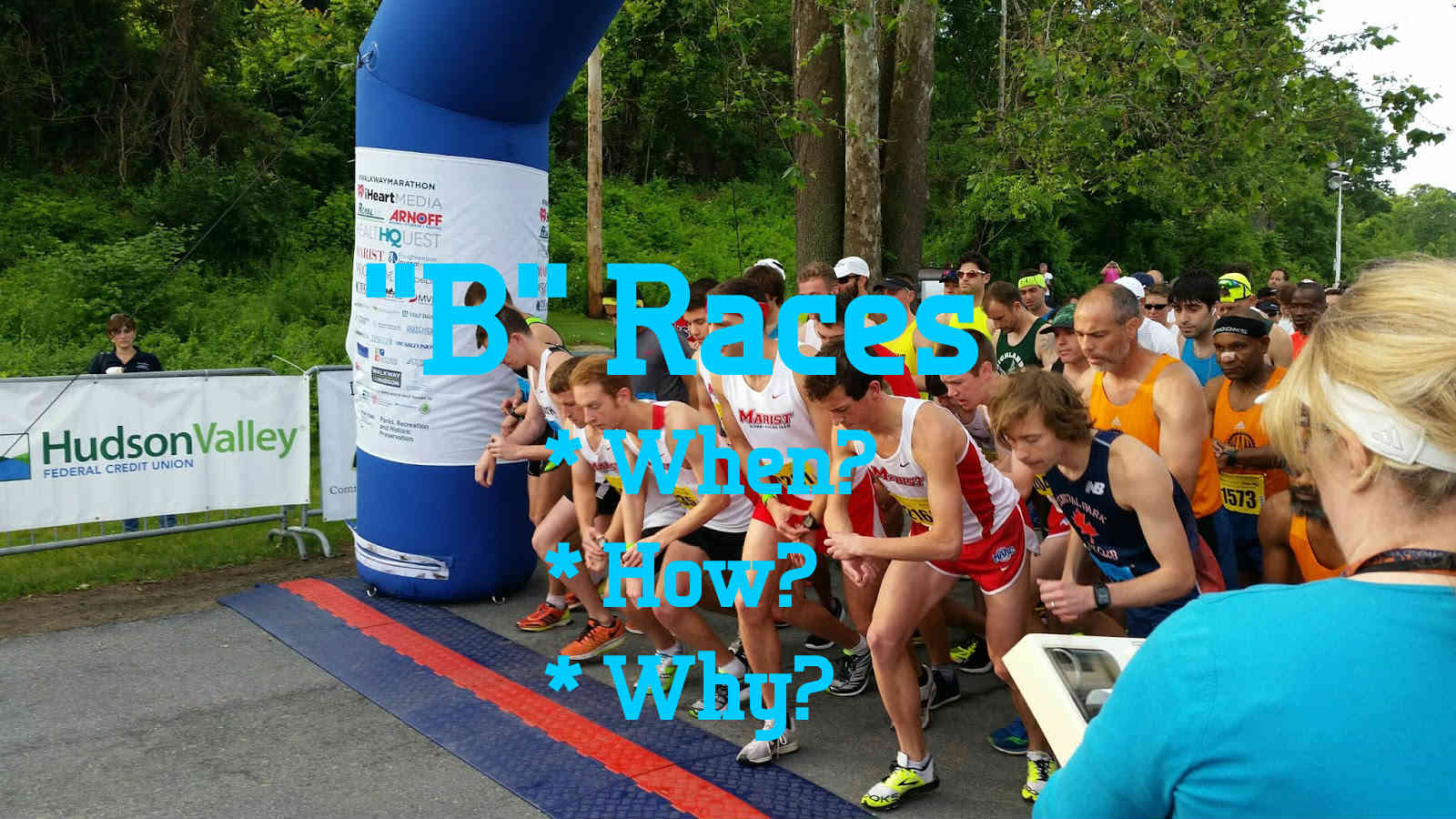 “B” races are events that you use to prepare your body and your mind in the lead up to your main goal race. If you plan and implement your B races properly, they will be of huge benefit both physically and mentally for your goal race. But, if you do too many of them, do them too close to the A race, do them at too high an intensity or choose the wrong race distances, they can leave your best laid plans in tatters.

Take a trail runner for example, building up for their first ever 100km event. They might decide to do a 30km trail event eight weeks out, and a 40km trail event four weeks out from their 100km race. This may, or may not, be a good idea depending on the runner.

Which events you choose to do for your “B” races should vary depending on a combination of factors. Including:

What are the benefits of B races?

B races are a great way to gauge your current level of fitness, gain some valuable race practice and they will also help to maintain your training motivation. Most runners find it easier to train consistently if they are training for an event, rather than just running for the sake of staying fit. It your goal race is 9 months away, it can seem too far away to really “need” to train, and therefore the motivation levels can drop off.

B races are an excellent way to plan and practice what you intend to do on the day of the big race. This might include:

If any of these things go wrong on the day of the big dance it can have a terrible effect on your overall performance. Training hard for 6 - 9 months, only to make a school-boy error on race day is both frustrating and de-motivating in terms of wanting to get back out there and race again. If you put in the hard yards training, then you deserve to get an awesome result at the end of it all.

B races are the perfect opportunity to make your mistakes, and correct them, so you minimise the chances of things going wrong during your goal race.

It is probably easiest to explain the philosophy behind B Races using an example of two different runners with the same “A” race in their calendar.

Jane has entered the UTA50. She has been running consistently for 15 years with minimal injuries. She has run the UTA50 twice in the past, along with numerous other ultra events and she is looking to beat her time in the UTA this year. To do this she has to be able to maintain a steady/hard level of effort for the entire duration of the race.

John has also entered the UTA50. He has been running for 9 months and his mates talked him into entering the UTA over a few beers at the pub one night. He has already completed a half marathon, but pulled up with fairly sore knees, so needed a couple of weeks off running to recover. His aim for the UTA50 is to finish it without completely wrecking himself, and hopefully beat one or two of his drinking buddies in the process.

The UTA50 is in May, both Jane and John are looking for some “B” races in the lead up to the UTA.

What length event should you choose for your B race?

This is very dependent on your level of running experience and your history of injuries.

Jane chooses to do the Six Foot Track (45km, 1500m vert) 8 weeks out, and Mt Solitary Ultra (45km, 2500m vert) 4 weeks out from the UTA. She knows Mt Solitary is a hard race, but she has done it before and knows that if she runs it at 80% she can recover within a week and get back to her intended UTA training program.

Jane does Six Foot at 90% effort, and is training well again within a week, she also does Mt Solitary, but only at about 70% effort due to a few niggles and the fact that she is feeling more tired than usual. Again, she pulls up ok, and is quickly back on track for the last little spurt of UTA training. She smashes the UTA and gets a 15 minute PB.

John chooses to do the Six Foot Track (45km, 1500m vert) 8 weeks out, and The Jabulani Challenge (45km, 1500m vert) 4 weeks out from the UTA. He has never raced more than 21.1km before, but figures that a couple of 45km training events will get him in great nick for the UTA.

John does Six Foot at 90% effort. He finishes with very sore knees, and also now a painful foot. He needs 2 weeks completely off running, before he carefully eases back into some gentle training. He wisely decides not to do the Jabulani Challenge, and he makes it to the start line of the UTA averaging only 20km of running per week for the final 8 weeks of his program. Needless to say, the UTA is not much fun, and John’s goal of beating his drinking buddies was over before he even made it to the start line.

What criteria should you use to choose your B race?

When should your B races be timed?

Once again, this will depend very much on the individual, and also on the length of your goal race.

An 800m track runner for example might race every weekend of the season, and be very successful with this strategy.

An experienced 100K runner might do a 45km race four weeks out, and a 20km race two weeks out to help “sharpen themselves up”.

As a general rule of thumb I would time your B Race to allow 1 week per 10km’s raced. So a 30km B Race, three weeks out from the goal would be ok, but a 50km race three weeks out would be too much.

If you are likely to be towards the mid-tail end of a field, then it might be better to use hours rather than km’s. Allow 1 week for every 1 hour raced. The reason for this is that it might take a fast runner 3 hours for their 30km B race, but it might take a slower runner 5 hours for the same 30km B race. You won’t fully recover from a 5 hour B race in three weeks.

The absolute bottom line behind having a successful goal race is consistent training. Your choice of “B” races can either make you, or break you.

Get your Free 7-Day Trial