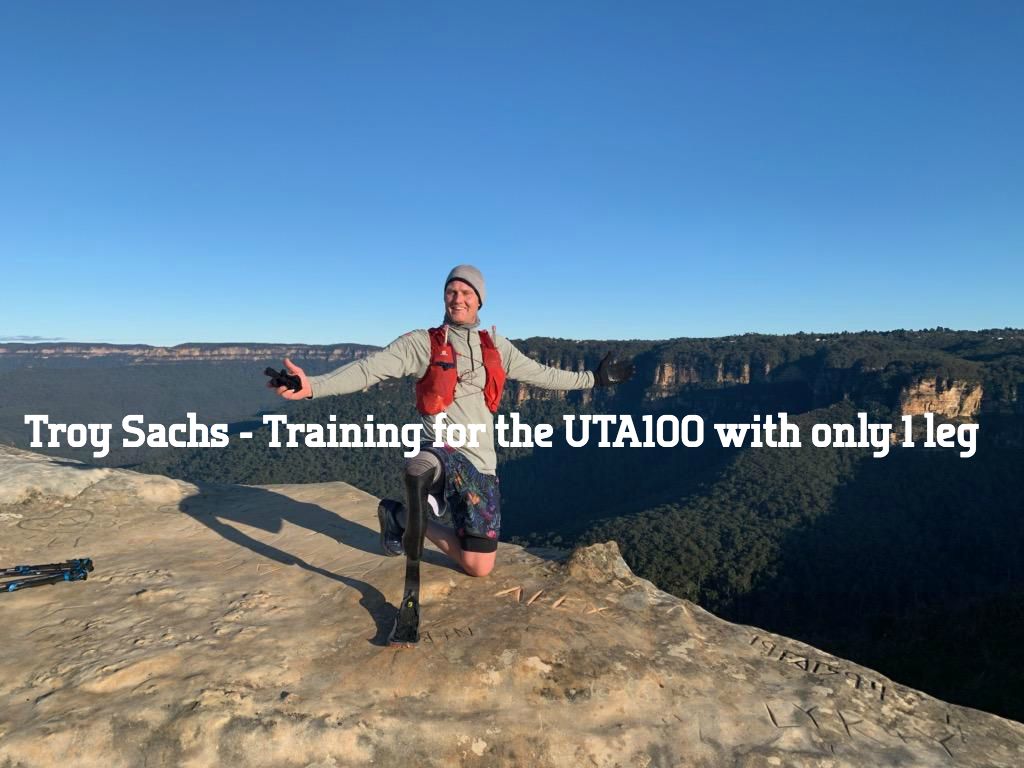 I recently started coaching Troy Sachs. Troy's main goal when we met, was to build up for the UTA100. Not all that unusual you might think - except that Troy is missing a leg. He was born without a tibia and had to have his leg removed at the age of two.

Troy's life since then has been a remarkable one, and he has been kind enough to spend some time with me sharing some of the amazing life experiences he has had.

Troy's athletic achievements speak volumes about his  strength and resilience.

He has represented Australia at 5 Paralympic Games winning two gold medals. He was a professional wheelchair basketball player for 20 years living in the U.S. and Europe, and he has since been inducted into the Sport Australian Hall of Fame.

Troy's transition into trail running has only been recent. In 2018 he completed the Oxfam 100k Trail Walker in just under 30 hours. This experience of being in the great outdoors and loving the mental and physical health benefits it brings, sparked a desire to start running on trails.

Since the transition to trail runner, Troy has been on an extremely steep learning curve. He has lost over 30kg of muscle to help improve his running efficiency, especially on the hills. He has been co-designing and experimenting with a range of different prostheses trying to work out which combination of material and design will work best on the uneven terrain he has to negotiate in the bush.

When we first met, he could barely balance on his prosthetic leg without support.

Most of us have, what I now realise is the luxury of, an ankle joint, calf muscle and knee joint which can make millions of micro adjustments to help us balance. All of Troy's balance has to come from his hip.

He doesn't see any of these additional challenges as being unusual. As he said to me the day we were filming this interview "This has been "My Normal" my whole life"

Coaching Troy is a privilege.

It has also been a steep learning curve for me. We have had to account for a whole lot of variables which are new to me as well. One week running around Manly Dam Troy's new "running blade" prosthetic broke. The carbon couldn't cope with the ruggedness of the terrain. 2 weeks and $15,000 later we could restart training once the replacement blade had been made.

A  few weeks later a long run in the mountains caused some blistering and skin deterioration on Troy's stump. His rapid weight loss meant that the carbon sleeve his leg slips into was now far too big and he was wearing 6 layers of protection to try and pad out the gap.

This was another two week enforced break for the skin to repair. Further running would have caused pressure sores and potentially irreparable damage to the stump.

Despite these extra hurdles, Troy's incredibly positive attitude to life is quite inspiring, and his new found love of the bush is one I fully understand.

Watch the interview and listen to Troy's story. I hope you enjoy it a much as I do.

If you are training for the Ultra Trail Australia, we have a range of helpful advice to help you succeed on race day.

Click here to learn more about personalised  1 on 1 coaching

Get your Free 7-Day Trial